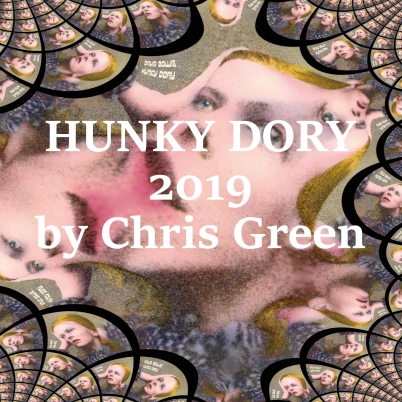 It all began one hot stormy night two years back when Hermione and I were living in Joy Street in Bridgewater. I dreamt it was 1972 and the album, Hunky Dory was playing. I was listening to the album, slowly and leisurely as I would have back then if someone had put it on the turntable. One side then the other. It was one of those rare dreams that you stay in for a long time. While my dreams normally comprised multiple interlocking narratives, this one had just a single thread. Hunky Dory. It seemed to move forward in real-time. The music flowed through me and over me. It inhabited my senses. It felt in a curious way like I was the music. The eponymous title track of the album, in particular, sounded sublime.

It was not until I woke that I realised there was no song called Hunky Dory on the album. While most of Bowie’s albums had a title track, Hunky Dory notably didn’t. Where could the phantom tune I had heard possibly have come from? In the dream, the tune was slipped in seamlessly between Changes and Oh You Pretty Things. I was able to recall it note for note. It was still there intact, going around and around my head like an earworm. It was a sweet slow-tempo number with tinkling piano, playful acoustic guitar runs and a haunting melody. Reminiscent perhaps of Quicksand from the album with hints of The Bewlay Brothers. I wondered if perhaps it was a song from another of Bowie’s albums. Maybe a later one. Having been a lifelong fan, I was familiar with most of his work. I spent some time running through the possibilities in my head. Nothing fitted. So far as I could tell, this was an original tune. My original tune.

I remembered reading that Paul McCartney claimed the melody of Yesterday came to him in a dream. Keith Richards made a similar claim about Satisfaction. He had woken up with it and put it down on a cassette machine. Both had worried that they had heard the respective tunes somewhere or other in the past and they were someone else’s work. They both discovered that they were their originals. So perhaps this wasn’t so unusual. Classical composers too, it was said, often arrived at important passages this way. Perhaps musical ideas were in the ether like radio waves and it was a question of tuning in to them. Perhaps sleep created favourable conditions for this. When all the other senses were switched off.

But still! If I was right about the quality of this song, then it would probably have been the standout track on the Hunky Dory album which is frequently cited as Bowie’s finest work. But it wasn’t on the acclaimed album. I couldn’t let it slip away. Starting with the melody, I began to put the notes down on manuscript paper. I then put down the piano and guitar parts. The words were a little harder but with those I couldn’t remember, I improvised. I could always improve these if need be. It was the melody that mattered most.

Many of you will have heard the song by now, perhaps several different mixes of it. Even cover versions. If so, you will understand how excited I must have been that morning two years ago. But, as an unknown artist, it was not easy to get Hunky Dory onto the market. Not being an established name, no-one wanted to even talk to me. I couldn’t exactly tell them I had heard it on a David Bowie album. Even supposing I could have, this would hardly support provenance of authorship. For a start, I would have been about four years old at the time of the album. Even Mozart would have struggled to come up with a decent tune at this age. Nor could I say it came to me in a dream. They would think I was loony tunes and end the call there and then. Someone will get back to you became a familiar line. No-one ever did. I almost gave up.

Hermione had made it clear all along that she was not that keen on the song.

‘You’ve done all you can, Ziggy,’ I remember her saying. ‘You ought to give up on it. Then perhaps you would have some time and we would be able to go out now and again. We could go and see a band or something.’

‘The song will never get anywhere, no matter how good it is,’ I remember my brother Nathan saying. ‘The market’s sown up.’

‘I found the line, turn and face the strange crack in the sky a little puzzling,’ I remember my therapist, Rebel saying. ‘Perhaps you might explain what it means to you. And this line, strange fascinations of a hand reaching down. Hunky Dory’s an odd kind of song, isn’t it?’

‘Although they’re a bit weird, Ziggy, I can’t help thinking some of those lyrics seem familiar,’ I remember Jonny Bisco, the landlord of The Major Tom saying.

It seemed no-one believed in my song. But through thick and thin, I persevered. Eventually, Chris Green at The Kaleidoscope Repair Shop where I worked said he quite liked it. He persuaded his friend, Vic Timov at Unicorn Records, a small independent label based in Devon to give me studio time to record the song properly. Although there were problems with distribution of the CD and vinyl when the tune started selling in tens of thousands, downloads alone took it to the top the charts in several countries.

It’s a pity Mercury Records are taking me to court. They claim that the melody of Hunky Dory is identical to the melody of After All, one of David Bowie’s early tunes. There may be a slight similarity but there are only so many combinations of notes available. Occasionally some duplication is inevitable. And the lyrics to Hunky Dory are completely different. I can’t for the life of me see that they have a case. It’s essentially a different song. My solicitor, Guy Bloke of Chesterton, Pringle and Bloke is optimistic he can deliver a favourable outcome.