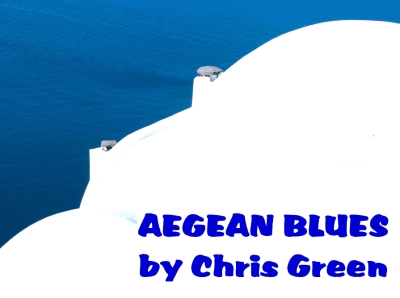 The man and the woman arrive at the resort late in the evening. They are the only ones aboard the transfer coach to be dropped off here. Most of the others are headed south to the beach-party resort. Having made something of a detour, it is with an air of indignation that the driver deposits their cases by the side of the road a little distance from the apartment block.

A gaunt woman in a blue overall appears out of the gloom to lead them to their accommodation. The man and the woman would like to ask questions but the woman in the blue overall has the harassed look of someone at the end of a long shift. She hurries them past a swimming pool and along a murky corridor. She opens the door to apartment number nine and, without ceremony, disappears.

Aegean Blue is a small two-storey block with just thirty two apartments. In the words of the brochure, a tranquil setting, for those seeking a quiet holiday. Number nine is on the ground floor. They switch on the light and notice that it is smaller than they expected. There are no features to remark on. No attractive little alcoves. No seascapes or pictures of sunsets on the wall. A large wardrobe takes up most of the room and the twin beds are a long way apart. Neither of them makes any reference to the shortcomings of the accommodation. It is as if by not showing disappointment, they might not, after all, be disappointed.

‘It’s so hot,’ the woman says. Thirty three degrees the captain told them shortly before they touched down.

‘And the shutters are closed,’ the man says. Despite the delayed flight, the mix-up over the cases, the insufferable hard-house music on the coach, and now the smell of pine disinfectant in the room, he is still is hoping they will make out.

After a walk in the moonlight along the road that hugs the beach, past apartment blocks that, if they were finished, would look out onto the sea, they manage to find a bar that doesn’t advertise Greek Dancing. After a bite to eat and a bottle of the local wine, the woman feels more relaxed.

The man agrees. He feels their block is far enough from the plate-smashing quarter of the resort. He is relieved. He remembers that when they booked the holiday on a stressful Saturday in March, he had chosen to ignore the fact that the Bouzouki Musician of the Year qualifiers were being held in a nearby resort.

Arm in arm, they arrive back at the apartment. It seems airier and more welcoming with the shutters open. And it offers a lovely view of an olive grove with a church on a hill visible in the distance.

The woman hangs up her skirts and tops on the wire hangers in the wardrobe and lines up her cosmetics in the bathroom. The man pushes his case under the bed. They are just getting undressed when they hear the menacing drone of a mosquito in the room. The woman locates the mosquito repellent and starts to spray the room.

The man pours them a refreshing glass of the aniseed liqueur they bought at the airport. They sip their drinks and begin to settle. They lie down on the bed and look at one another lovingly.

‘It’s so nice to actually be here,’ the woman says.

‘Our first real holiday together,’ the man says.

There is a sudden searing rasp from upstairs, followed by another. Wooden furniture being pushed repeatedly across a tiled floor perhaps. As the disturbance continues, the man and the woman speculate that beds, the table and chairs, the dressing table, the wardrobe, and perhaps a flotation tank are being rearranged. The rep on the coach mentioned that a majority of the arrivals to the island were on Friday night and the early hours of Saturday morning. And, after all, they themselves moved their own twin beds together straight away. At least, the continuous scraping sounds drown out the clatter of the primitive plumbing, the nocturnal network of barking dogs and the dance music from the club. But it is hardly conducive to tender lovemaking.

The next day, despite their tiredness, the man and the woman are out and about visiting the sights on the island that the guidebook recommends and do not spend much time in the apartment. But that night, the screeches and scrapes from upstairs are even louder and more persistent than the first night. Previous explanations seem redundant.

As they lay awake, they compare the cacophony to a large sea mammal giving birth, amateur violinists tuning up and an angry elephant.

As the night wears on their humour diminishes.

They begin to blame each other for choosing the holiday.

‘If you hadn’t been so concerned with price we could have taken a villa,’ the woman says.

‘If you had listened to what I found on the Internet, we would have gone to the west of the island,’ the man says.

‘And you didn’t pack my meditation CD.’

‘Would you like to listen to some jazz on my iPod?’

‘And we’ve run out of mosquito spray.’

At 4 am, after several unsuccessful attempts to heal the rift, the man feels he can take no more. He calls the travel company’s twenty four hour helpline, only to be told by someone from the Indian subcontinent that office hours are 9 to 5, Monday to Friday. ‘Please be leaving a message after the tone,’ the voice says. A complaint the following morning to Lefteris, who despite his resemblance to a beach bum, appears to be the proprietor, reveals only that he understands little English. The resort rep, Dale, who they finally track down the next day at Athena Quad Bike Hire, is no more helpful. He says he has had no other complaints. He seems more concerned with helping the girl in the day-glo bikini, who wants to know which nightclub is the best to meet fit fellas.

Despite trying wax earplugs rather than the foam ones, the man and the woman have another sleepless night. Too tired to venture out the next day, they decide to take it easy on the sun loungers by the pool. Most of the guests have gone out for the day on the travel company’s glass-bottomed boat trip. In the bar, Lefteris, with his crusty locks and grubby red Che Guevara t-shirt drinks a beer and watches the football, Brazil versus Argentina. He has his feet on the bar and seems to be doing his best to ignore his customers. Not that there are many, just the older couple from Gateshead, or perhaps it is Newcastle, who are staying in the next apartment. The man asks the man from Gateshead or Newcastle if they have been kept awake by the nightly clamour.

Given the language barrier, the man decides not to pursue the matter. He manages to attract Lefteris’s attention during a commercial break.

The man agrees and reels off the names of some players.

The man takes two chilled beers back to the poolside, where the woman has removed her bra and is tanning her back.

‘We could have an early lunch at Aphrodite’s, and then a siesta,’ the man suggests.

‘Sounds good,’ the woman says. ‘Could you rub some more suntan lotion on to my shoulders?’

The morning passes quietly. Occasionally the bronzed body builders that live on the sunbeds at the other end of the pool change position. The gay couple saunter past in new hats. The pair with the piercings and the tattoos nurse their sunburn under a parasol, and one or two of the other guests come or go.

‘Are you hungry yet?’ the man asks.

‘I think I could be persuaded,’ the woman says. ‘Rub some factor fifteen on the backs of my legs, would you?’

After calamares, dolmades and Greek salad with a chilled bottle of rosé, the man and the woman return to Aegean Blue.

The apartment is quiet. Very quiet. Not a murmur from the plumbing and even the fridge seems more subdued.

The man sees a window of opportunity and seizes it. The woman is pleased that he has and responds favourably. She says she has been waiting for him to make the move since they arrived. Their sighs and moans build gradually into a crescendo. They climax together in a frenzy of thunderous passion. Afterwards, they lay together in one another’s arms.

The brief silence is shattered by a forceful thumping like a hip-hop bass-line. It takes the man and the woman a few seconds to realise that someone is knocking at the door.

‘Keep the bloody noise down in there, will you!’ an angry voice shouts. ‘We’re trying to get some sleep upstairs.’

Hi I’m Chris. I have written over 200 short stories, most of which you can view at chrisgreenstories.com. I am also a keen photographer and you can see examples of my work at chrisgreenphotographs.com I live in Watchet, Somerset, United Kingdom. I write short stories and like to choose unusual subjects and viewpoints that are a little off centre. I hope you enjoy these quirky tales of modern life. Web address is chrisgreenstories.com Please also take a look at a selection of my photos at chrisgreenphotographs.com All written and photographic content on these pages is copyright Chris Green 2014 to 2017: All rights reserved View all posts by Chris Green