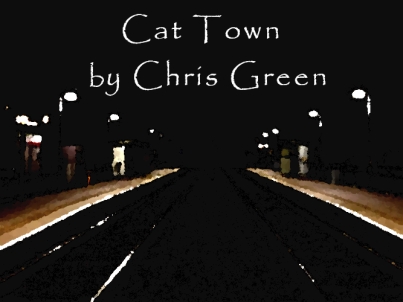 Chet’s train to Chatton has never been this late. It is seven o’clock. He has been on the platform for an hour and a half without seeing a soul. Where are the other passengers? Admittedly, Dark Hollow is a quiet backwater, but in the six weeks he has been working at the secret research establishment here, Chet has never known the station to be completely empty. At this time of day, there are usually a steady stream of people on their way home from the base. For that matter, where are the trains going up the line to Everwinter? Even if there are delays on the southbound track, surely there should have been a northbound train or two in the time he has been waiting. Where are Vlad and Dmitri, he wonders? They always take the northbound train.

Chet puts away his paperback of The Wind Up Bird Chronicle, and gets up to check the timetable on the wall. According to this, it should be the busiest time of the day. Half a dozen trains are scheduled to stop. Something is badly wrong. He tries to phone Mandy to let her know that he will be late, but he does not have a signal. He takes the battery out of the phone and the SIM card and puts them back in. He fiddles around with Settings. Still nothing. No signal, no wi-fi, nothing.

It is Friday, so Mandy will be setting off for her Pilates class about now. Chet remembers that he has sometimes seen a taxi waiting outside the station. It is a long journey and will be expensive, but it will be worth it. He takes the exit to investigate. There is no taxi waiting today. But there is a phone box. He can phone Mandy on her mobile and find out what is going on. If she is in the middle of her spine stretches or leg circles and does not answer, he can phone Doug or Pete. One of them will surely have some information about what is going on. He inserts his debit card, but the machine spits it out. He tries his other cards. The same thing happens.

The streets are empty, no people, no vehicles anywhere. The air is gripped by a Simon and Garfunkel silence. Has the village been evacuated in the time he has been waiting in the station? Chet considers walking back to the base, but it is getting dark now, and it is coming on to rain. The base itself is half a mile away and he would be able to contact someone from there. But as he does not have to work tomorrow, he does not feel the inclination to retrace his steps. Perhaps next week he will start driving to work like some of his colleagues do. He could do a car share with Kobayashi perhaps. He also lives in Chatton. In truth, he is a little scared by the idea of going back into the underground base at night. It is quite a sinister place at the best of times. He has not yet discovered what its actual function is. All he knows is that the information he handles is Classified.

He crosses the footbridge to the other platform. The door to the station office is locked, but it submits easily to a gentle nudge from his shoulder. He tries the phone. It is disconnected. After a few deep breaths to calm himself, he concludes there must be a simple explanation. Meanwhile, there is nothing to do but to stay put. If the worst comes to the worst, he can sleep on the bench in the waiting room. If a train turns up in the night then fine but if not, whatever emergency is causing the delays is certain to be sorted out by morning.

Chet has a night of fitful sleep, plagued by dreams of searching for missing cats and being trapped at the bottom of dried-up wells. This is only broken by an announcement over the public address system that the 5:29 train to Ramwood, calling at Fool’s Marsh and Little Holbeck and Cat Town will be 11 hours and 41 minutes late, due to an irretrievable loss. The 5:29? This is his train from yesterday evening. Clinging to the hope that the 11 hours and 41 minutes has elapsed, Chet wearily makes his way on to the platform to see what is going on. But really, the excuses they come up with for train delays. Irretrievable loss, what is all that about? And the announcer. Cat Town. Surely he means Chatton.

The platform is empty. Overnight, clumps of weeds have sprung up between the paving. A few of the station’s windows have been broken and there is some fresh graffiti. It is in a language that he does not understand. To his greater astonishment, the railway tracks have disappeared. For as far as he can see up and down the line in both directions, there are no tracks. It is as if the line has been closed for years. The space has been taken over by bramble and bindweed, burdock and bracken. There are prize-winning marsh thistles and even some sizeable sycamore trees growing.

Chet feels a surge of panic. While he is aware that the work he does at the base might be sensitive, none of his training has prepared him for any eventuality like this. Any prospect of a rational explanation appears to have vanished. Anxiously he investigates the area outside the front of the station. Here again, things have changed since yesterday. There is random debris strewn on the tarmac, a buckled bicycle wheel, a torn rubber boot, a shattered picture frame and a washing-up bowl. There is broken glass on the pavement here and there and a build-up of litter in the gutter. Yet, there is no sign of life. The streets are in the grip of the intimidating mute stillness they were yesterday.

Mandy must be worried sick by now. Either that or she is thinking he is having an illicit affair. Perhaps she thinks that he has run off with her friend, Lucy again. It was last Christmas, but Mandy doesn’t seem to have completely forgiven him for his transgressions. He needs to get back to reassure her, and soon. He takes the phone out again, but now it won’t even power up. How is he going to get back home? Back to reality? Also, might whatever has happened here be happening everywhere? Might what was accepted by everyone as reality yesterday now be gone forever?

Back on the platform of the station, Chet spots the lone figure of a man in the distance. He is a few hundred yards along the track, or what yesterday would have been the railway track. Today it is a veritable jungle. The man has a stick and is beating back the bracken. He seems to be searching for something. The railway track perhaps? Disorientated Chet might be, and terrified, but at least he has not lost his sense of humour. He chuckles. Slowly he makes his way through the undergrowth. He can hear a faint voice. The man is calling out something, a name maybe. Perhaps he has lost his cat. Or his parrot. Or his pig. Or his monkey.

With each step, the vegetation becomes thicker until it is so dense it threatens to envelop him. The more Chet moves towards Doctor Dolittle, the further away he seems to get. Doctor Dolittle grows fainter and fainter as if he is evaporating. Finally, he vanishes altogether. Was he nothing more than a phantom, Chet wonders? Is he losing his mind? At least, the station was a place of relative safety. He turns around to make his way back there. To his horror, the station has disappeared. He is faced with an unfamiliar terrain. He cannot even work out where the station might have been.

Chet stumbles through the wilderness, in search of something, anything, that will offer hope of escape from this surreal nightmare. He successfully avoids the swarm of wild bees that comes at him, but he does not see the gap in the ground cover until it is too late. There is nothing he can hold on to. He finds himself at the bottom of what seems to be a dried up well. The air is chilling and has the smell of damp earth, mould, moss, lichen. He is dazed. He tries to pick himself up. His legs feel weak and his shoulders, arms, and chest hurt from the impact. He tries to examine the grazes on his arms, but he cannot see his body at all. He looks up. He can only see is a thin slither of daylight.

He is now shaking with fear. How is he going to get out of here? The gap is narrow and the walls are sheer. There is no way he will be able to scale them. And surely the chances of someone happening by in this wilderness are minuscule. Is this it, then? A slow lingering death? He will never see Mandy again. He will never again touch her soft skin or taste her sweet lips. Nor Lucy’s, for that matter. He will never make that trip to Venice. Or see the final episode of Black Mirror. He will never own that small jazz club that he has dreamed about. He will never live to see West Ham win the Premier League. Well, no change there then.

‘Hello! …… Chet!’ calls an echoey voice from up above.

‘God, am I glad to hear a voice,’ Chet shouts back.

‘I’m sorry that you fell down the well,’ the voice says. ‘I should have covered it up. Are you OK?’

‘Get me out, can you please,’ Chet shouts.

‘Don’t worry. Don’t worry. I will soon have you out of there. Let me go and get some rope.’

With this, the stranger goes off. Chet is nervous that he will not return. But he is given little chance to indulge his dark despair. In no time at all the man is back and has secured a length of rope. He tosses it down. Chet catches it and climbs up to daylight.

‘I am sorry about that, Chet,’ he says. ‘I hope you don’t mind. I’m Haruki Murakami. I noticed that you were reading a book of mine, back there at the station.’

‘Now! Chet! I’m doing some research around here for a new novel. It has the usual themes, murder, sex, war, jazz from the nineteen fifties, lost cats and, of course, dried-up wells, but this time there are going to be some English characters. It has a protagonist who works in covert operations, has a dark foreboding character, dreams of owning a jazz bar and is having a clandestine liaison with his wife’s friend. I do apologise, but you seem to have walked into my novel.’