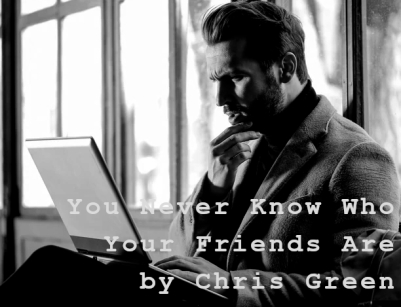 You Never Know Who Your Friends Are by Chris Green

A writer can become dangerously obsessed with fiction. The temptation to create something original out of an ordinary everyday situation can be hard to resist. I could not possibly know what I was getting into when I created Quentin Thief’s social media profile. Quentin was a fictional character from one of my short stories. When I found myself twiddling my thumbs one rainy afternoon, to amuse myself, I set up Gmail and Facebook accounts for him. I gave him a few page links, David Lynch, Banksy and The Prisoner and Liked a couple of bands for him, The Dead Kennedys and Dogs Die in Hot Cars. I became his Facebook friend and set his status to public, but without any real expectation that anyone would see his posts.

Quentin’s first friend request came from Seamus Dark. I was puzzled as to how this could have happened, but intrigued. Seamus was a minor character in Magic and Loss, another of my short stories. Seamus didn’t have a very detailed Facebook profile. His only Likes were Twin Peaks and the blind musician, Moondog. Rather than panic as perhaps I should have done, I played along with it. There was bound to be a simple explanation. It was surely someone playing a prank, as indeed I had been. By accepting the request, I felt that one way or another I might be able to get to the bottom of it.

The next time I logged on to Facebook as Quentin, he had five friends. Besides myself and Seamus Dark, there were three others, Reuben Flood, Pearson Ranger and Randy Drummer, all characters from stories of mine. Reuben was a character from the semi-autobiographical Quicksand, Pearson Ranger from my story Snake in the Glass and Randy Drummer from Soft Watches. I could find no rational explanation. No two ways about it, this was spooky.

There were a series of conversations between the characters, both on their timelines and private messaging. I scrolled back through a few screens. The references were cryptic. The copious use of acronyms, AFDN, AFT, BTDTGTS, IYNAEGBTM, etc made the messages unfathomable to a social media novice like me. I had only just grasped LOL and LMAO in internet jargon. Were they hatching some kind of plot? There certainly seemed to be a lot of collusion between them. I signed out, and signed in as myself but found, amongst my regular feeds, exactly the same posts. Their profile pics bore an uncanny resemblance to how I had visualised these characters. Quentin Thief wore an Aloha shirt. Seamus Dark was well-groomed. Reuben Flood had a thick beard and wore a Ché Guevara beret. Pearson Ranger had a military buzzcut and Randy Drummer wore a pork pie hat.

I phoned my friend, Ram, who was knowledgeable about IT matters. Ram banged on about internet security, proxy servers, hackers, firewalls, and malware, but after a few minutes of his techspeak, I was none the wiser. What on earth were packet sniffers and keyloggers?

‘Can you come round and have a look, Ram?’ I said finally. ‘You’ll probably be able to put your finger on how this is happening just like that.’

‘I’ve just got to run a machine round to Gerry’s and I’ll be over,’ he said.

‘About that,’ he said. ‘Seventy-eight point four. Look! I’ll be over around seven, OK. Why don’t you just switch the thing off and take the dog for a walk on the common or something?’

With my creative writing residency at the university in abeyance and Patti on sabbatical in San Sebastian, life was slow. Tom was in the forces and Cat had gone off to university, so I just had my dog, Murphy for company. Murphy had originally been Cat’s dog but now she was in Edinburgh, he had become my responsibility. Despite his being twelve-years-old, he was still a ten mile a day dog. I was no longer a ten mile a day dog walker. It was a good thing that the common was so close. I could find a seat while Murphy ran around chasing phantom rabbits.

At The Belted Galloway, I got chatting to a couple of walkers. They waxed lyrical about the beauty of the area. How lucky I was to have this all on my doorstep and such a delightful pub, full of rustic charm. Did I know there were thirty-eight species of wildflower on the common? They were just going to do another six miles and then call it a day. They had found a lovely little Airbnb that welcomed walkers. I began to feel I was spending too much time in front of a screen in my internal world.

I got home late afternoon and put a pizza in the oven. I was apprehensive about switching the computer on, but finally, I did. By the time Ram arrived, a little after seven, Quentin’s Facebook friends had multiplied. There were another half dozen familiar names from my literary lexicon. This time the list also included a couple of my leading characters, Max Tempo from Tequila Mockingbird and Tara Vain from Tara’s World.

Muttering to himself, Ram started going through the feeds. Over his shoulder, I could see at a glance that Max and Tara seemed to have started most of the post entries, with various combinations of my other characters responding. Lara Love from Little Dissing and Dr Bolt from Be Here Now had joined the fray. Dave Too from Kosmik Kitchen was there too, along with Roy Tackler from Slumpton. Poor Roy. He spent most of his fictional life on the bench. I never did give him a first-team game. Then there was his chronic alcoholism. The list of characters on the posts seemed to go on and on. Even Charlie Saxx from a story I was in the process of writing seemed to have got in on the act.

‘GHOMCOAFA,’ Ram read out. ‘Get him off my case once and for all. Looks like someone’s out to get you.’

It was Tara. I had described the nitty-gritty of Tara’s reliance on other people, he disastrous relationships and her subsequent descent into madness. Perhaps I needn’t have been so explicit.

‘WWLWEP. We will liquidate with extreme prejudice. Max Tempo’s not too keen on you either. What did you do to upset him?’

‘IGTBBTTR. I’ll get the bloody bastard this time around. Well! This doesn’t sound very fictional. What did you write about him?’

‘He was originally a delusional character in my story, Tequila Mockingbird, who thought the Mexicans were out to get him. He saw signs of them everywhere. Maybe I could have been more sensitive in the way I portrayed his nervous breakdown. Now I think of it, I may have used him in one or two other stories.’

‘That’s a line from The Prisoner. The Prisoner is one of the likes I gave to Quentin Thief. It looks as if he’s trying to make a point.

He carried on scrolling down. Another batch of acronyms appeared.

All these acronyms, Ram. Must be a youngster, don’t you think?’ I said

‘IGYBFWLAM?’ I asked, before Ram moved on. This was from Nolan Rocco who featured in several of my stories.

‘I’ll get you back for writing lies about me,’ Ram said with little or no hesitation. How did he know all these acronyms or was he just making them up? Perhaps he had been creating the characters? Now I was getting paranoid.

‘He says that you mentioned him in one of your stories and he’s unhappy about it.’

‘Click on him. It can’t really be Mick Jagger, can it?’

‘He appeared briefly as a character in The Food of Love, I only gave him a couple of lines.’

‘Perhaps he feels he should have had more.’ Ram began to hum Jumping Jack Flash, one of the least hummable tunes I could think of. He was thinking again.

‘Nice mix of upper and uppercase characters. Quite a secure one I’d say.’

The posts on my wall looked much the same but there was now an additional one from Quentin Thief. It was the picture of a car crash.

‘What’s that all about?’ Ram asked.

‘It seems to me that because you and Quentin Thief are friends that you are going to see any post that he puts up.’

‘But the ones posted by the others should not show on your wall.’

‘So these that are posted by Tara Vain should not be there. OK? Or the ones by Max Tempo.’

‘You’ve heard of the darknet,’ he said.

‘How does this fit in with what’s been happening here,’ I queried.

‘Probably nothing to do with it,’ said Ram. ‘But something weird is happening, isn’t it?’

‘Simple! You could do what you should have done in the first place, delete your Facebook account.’

‘But then I’ll never know.’

‘That’s right but, you never know who your friends are, anyway. That’s what they say, isn’t it?’