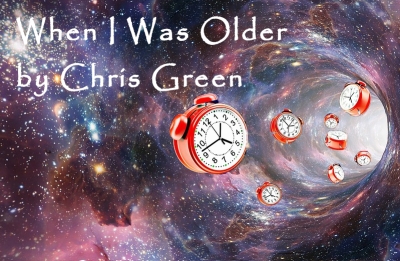 When I Was Older by Chris Green

When I was older, I was a saxophonist. I was one of the last living saxophonists before the instrument was banned and all saxophones were melted down to help the war effort. The trumpet suffered a similar fate. Brass instrument detection squads with sophisticated detection equipment were deployed with harsh penalties introduced for possession. But that was then. April 2047, if you want the precise date it became illegal to blow your horn.

I’m Charlie Tooting. You may not have heard of me as I am, at the present time, that is your present time, the time you are reading this, still a journeyman, working out tunes on the blues harmonica. Little Walter and Junior Wells are my inspiration. But at some stage, in what you think of as your future, you will hear my name. You will hear my music. Mark my words! You may even be moved to buy some. Make a note now! Charlie Tooting. Saxophone.

It is difficult, isn’t it, to get your head around the fact that time isn’t linear? This is not what you are led to expect. But, when you look more closely, there is no conceptual distinction between past and future, let alone an objective line of now. You need to drop the idea that time is something that flows. Time, like space, is just there. All of it. More helpful perhaps to view space-time as a four-dimensional structure. The fundamental laws of physics work the same both forward and backwards.

Saxophones were not melted down to help the war effort, of course. Nor were trumpets. By 2047, wars were not fought this way. All conflicts were conducted in cyberspace. The real reason for the ban is a puzzler. It may never be disclosed.

A group of us, a dozen in all perhaps, are sitting in Eve’s garden in the early Autumn sunshine. It is a Saturday morning. It is the time you refer to as now. Eve has put on a spread of cakes and pastries including my favourite, tiramisu. In the background, Chet Baker is singing about a lost love. It is not clear when his love went missing.

Vincent asks Eve if there is any wine.

Eve laughs and says something about 1969.

What on Earth is she on about?

‘A reference to a lyric from a 1976 tune by The Eagles,’ Holly Wood explains.

Mainstream rock is not really my thing. It lacks subtlety. Little use of counterpoint. Sparing use of minor keys. I prefer jazz and blues.

‘Is there anything going on today?’ Pascal asks. ‘Something we could all go to.’

I mention the possibility of going to the match. Our local team are playing one of the bigger teams. This doesn’t seem to interest anyone.

The stranger in the harlequin-patterned shirt stroking the Maine Coon cat tells us there is a Street Fair on Monday. With fairground rides, magicians, circus acts, music and dancing. He mentions the names of some bands. They sound like tropical diseases.

‘Is Monday a Bank Holiday?’ I ask. It seems strange to have one in October. If it is a public holiday, it will probably mean that my harmonica class will have been cancelled. Lou said nothing about this last week. He just told me I needed to learn a new breathing technique and practice my blocking.

‘Monday is a Bank Holiday,’ Eve says. ‘It’s a new one to celebrate Prince Barry’s birthday.’

Who is Prince Barry, I wonder? Have I missed something? It’s hard to keep tabs on everything. There are so many unanswered questions. Why are red buttons always the most important? Who let the dogs out? And what is that low-pitched hum we’ve all been hearing for the last three months? No-one knows.

Shrapnel. Operation Olive. The Battle of Rimini. 1944. This was a proper war. A war with tanks and guns. That’s where I came across the harmonica. It must have belonged to a dead soldier. 1944.

‘Time keeps on slipping, slipping into the future,’ Eve says.

You’ve probably noticed how the night moves. Without warning, you are shifted from one narrative to another. It is said that when we leave somewhere, we leave something of ourselves behind. Even though we go away, part of us remains. We might thus inhabit many places at the same time. I was unable to understand the mechanics of the mystical crossroads until I was older but this is the way it is with time. One day, you will wake to find that the information has silently seeped into your consciousness. You will find yourself zipping about the space-time continuum. It will become so commonplace you will not even notice when it happens. And happen, it will.

I am on stage. The Charlie Tooting Quintet. We are playing at the Rimini Bar. In a small town in the west of England. Maybe you are in the audience. I can see there are quite a few in tonight. If you are not, you can catch up with us elsewhere. You will find details of our touring schedule on our website. Be sure to check the dates carefully otherwise you may find you have missed us. We have a request to play How Long Has This Been Going On. This is strictly speaking a tenor tune but I like to surprise people by playing it on soprano sax. I look around the stage for my instrument. I don’t appear to have brought the soprano. In fact, I have no saxophone at all. All I have here is a harmonica. And there is no band.

Backgammon is considered a game that has the perfect balance between skill and luck. You need to make similar calculations to those you might make in a game of chess but at the same time, throughout the game, you have to rely on chance. The odds of throwing a double six are thirty five to one. The odds of rolling two double sixes in a row, when this is what you require to bear off, I believe, are one thousand, two hundred and ninety five to one. How then is Clancy Edo able to defy these odds? And this, of course, from a losing position and after I have upped the stakes with the doubling dice. Clancy has managed this on several occasions now. Littlewood’s Law suggests a person can expect to experience miracles, which he defines as events with odds of one in a million, at the rate of about one per month. But even so.

I think I can hear someone calling me. It could be that my new medication is ready.