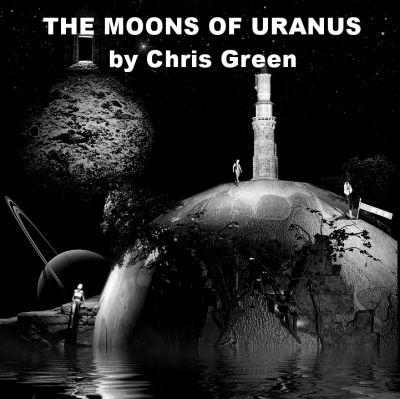 The Moons of Uranus by Chris Green

‘Look, Sean! There are some avocets,’ says Mara, excitedly. ‘They are avocets, aren’t they?’

Mara turns and notices that instead of looking out of the window at the expanse of estuary they are passing, Sean is studying his train ticket.

‘You’ve been poring over that ticket for about ten minutes,’ Mara says. ‘Is there a problem with it?’

‘Don’t you want to see the wading birds?’ Mara says. ‘This is the best time to see them. The tide’s just going out. Look! There’s a curlew.’

‘Sorry,’ Sean says. ‘I got distracted. I’ve not noticed it before but there’s lots of interesting information on a train ticket. For instance ….. ‘

‘You’ve been getting …… distracted a lot lately,’ Mara says. ‘We don’t have many days out together. You could at least try to enjoy it.’

‘I couldn’t help but notice you were studying the menu at the station café earlier, long after we had ordered. And we only went in for a cup of tea. You’re behaving rather strange lately. What’s the matter with you?’

‘It’s always worth knowing what a railway station café has on offer,’ Sean says. ‘This particular menu was well presented on good thick card and nicely laminated. And it was set in an unusual typeface. I was trying to work out what the font was. I think it might have been ……’

‘And I could be wrong but it looked to me as if you were counting the ceramic tiles on the kitchen wall yesterday. What was that all about?’

While Mara was away on a training course recently, he caught an episode of One Man and His Dog on the BBC and before he knew it, he was binge-watching all the episodes that were available on catch-up TV. Twenty four of them in all. He had to take a day off work to fit in all his viewing. He even took a trip around the local countryside to take photos of sheep and then made a collage of the best shots in the design program on his iMac. Then, for no apparent reason, he became fascinated by Quoits. He read up on the rules and the history of the sport and became familiar with the names of all the top players. He even joined one or two Quoits forums. Which somehow led him to snooker. After watching hours of the Masters tournament, he started to think about the trigonometry of the shots. In an attempt to calculate the precise angle of Neil Robertson’s long shot to the top right-hand corner pocket, he replayed the shot over and over on iPlayer. But then he became distracted by the design of the TV remote control and wanted to know how it worked so he dismantled it and could not get it back together again so he had to buy a new one on eBay. Even that was not straightforward because it led him into researching the history of PayPal.

Mara is quite often away on training courses. Apparently, there is a lot of tuition required these days to become an administrative assistant. New systems and the like, Mara has explained. Having so much time on his hands, though, is part of Sean’s problem. It wouldn’t be so bad if the children were still around but David is at Essex reading Computer Science and Debbie has moved in with Harry. Every day, Sean finds he needs to explore more subjects that he has not previously been interested in. In great detail. He feels the need to amass the information quickly, cramming he supposes you might call it, worried that if he doesn’t find out, he might die without ever knowing. Then, of course, while he is busy researching, he becomes fascinated by something else and finds he needs to understand this too. He hadn’t realised, for instance, that the cravat had enjoyed such a colourful history or that there were so many species of snails. Social media doesn’t help. How could he not be interested when he gets intriguing posts about Tuvan throat singing? Or the moons of Uranus? The Uranian moons, he discovers, are all named after Shakespearean characters. There are twenty seven of them. Twenty seven is apparently a significant number. It is the cube of three, the trinity of trinities. It is the result of a prime reciprocal magic square of the multiples of one seventh. It is the first composite number not divisible by any of its digits. There are twenty seven bones in the human hand. There are twenty seven books in the New Testament. Land mass makes up twenty seven percent of the planet Earth. Mozart was born on twenty seventh of January and wrote twenty seven piano concertos and twenty seven concert arias. Dark matter is thought to make up twenty seven percent of the universe. Then, there is the Twenty Seven Club. And, something else, oh yes, Sean and Mara have been married for twenty seven years.

‘You haven’t heard a single word I’ve said, have you?’ Mara says, interrupting his train of thought. The train is now pulling into their station.

It’s true. He realises he hasn’t been all that attentive. For the latter part of the journey, he has been busy counting the electricity pylons that line the track. There have been twenty seven of them, including some of those snazzy looking T-shaped ones by the Danish designer whose name escapes him.

‘Something about the work on the road bridge, was it, Mara?’ he says. This he feels is perhaps worth a try. It is a likely topic of conversation. They have frequently discussed the slowness of progress on the bridge widening scheme in recent weeks. On a bad day, it can take as long as half an hour to get across and they can’t remember when they last saw anyone actually doing any work. This is the reason they have taken the train for their day out today.

‘That was five minutes ago.’ Mara says. ‘We passed the bloody bridge five minutes ago, Sean. What I said was, it would be nice to have lunch at that whole-food place by the cathedral. Why don’t you ever listen?’

‘I know. You were ……. distracted,’ Mara says. ‘Look, Sean! I’ve been pretty tolerant but I think it’s time you went to see someone about this ……. distraction. Doctor Hopper, perhaps.’

‘I’m not sure about that,’ Sean says. ‘Besides, I normally see Doctor Bolt.’

‘Doctor Hopper’s better,’ Mara says. ‘He adopts a more holistic approach. Doctor Bolt will just say ah yes in that supercilious way he does and write a prescription for more pills. ……. By the way, are you still taking those ones he gave you for your ……. anxiety? …… Pira…. Para ….. Pramira….. Oh, what were they? You know, the ones with the long complicated name. …… Didn’t we discover they were a new experimental drug?’

A haunted look of realisation spreads slowly across on Sean’s face as it dawns on him that his random fascination for unlikely subjects started when he began taking the Piradictamyl27.

One thought on “The Moons of Uranus”