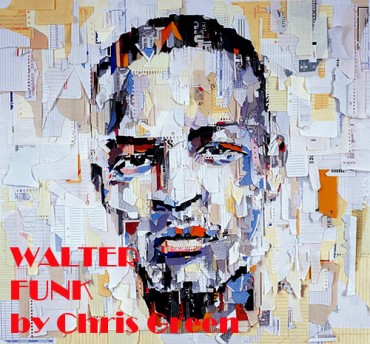 Walter Funk was a legend. Yet, if you ask most people today, they will not have heard of him. Walter Funk has no Wikipedia page and an internet search will take you instead to the Nazi economist, Walther Funk, but we need not concern ourselves with him. Walter, on the other hand, was a genius. He invented reversible clothes pegs and double sided fridge magnets, tipped cigars and weather vanes that shoot, so many things that we use every day. Yet, in these fickle days of throwaway fashions and disposable heroes, he has all but been forgotten. His name has disappeared from the history books.

Walter came from humble beginnings. He and his brother Marvin were born above a kaleidoscope repair shop in Shenton Bovis in the days between the wars. Money was tight. Their parents, Ken and Diedre Funk struggled against mounting debts to keep a roof over the brothers’ heads, Diedre perhaps more than Ken. Their debt levels were buoyed up by Ken’s gambling addiction which meant that Diedre often had to work double shifts at the cellophane factory to keep the bailiffs away. While Marvin did poorly at school, condemning him to a series of dead-end jobs, Walter displayed precocious talent, excelling at everything he turned his hand to.

Most of all, though, Walter showed an aptitude for invention. From the inflatable dartboard to the bouncing eggcup, he kept coming up with ideas for useful bits and pieces that people felt they just had to have. The one that really set the world alight was the wind-up tortoise. No longer was it necessary to find a warm place to house your pet for the long winter. The success of this was quickly followed by the clockwork hedgehog and the battery powered pigeon.

In 1944, at just twenty years old, Walter Funk was named Time magazine’s Man of the Year, the youngest by far to achieve the honour. The award was announced in the same edition of Time that exposed the real story about the war. As you now know, World War 2 actually finished in 1940, but both sides agreed to keep up the pretence of hostilities in order to keep people in work. There was of course, no actual fighting after the December truce of 1940.

Famous people in the modern world can be seen as products and as such they are subject to the stages of the product life cycle, namely introduction, growth, maturity and decline. Perhaps after decline we might add disappearance. Certainly, this seems to apply in the case of Walter Funk. People in the public eye have a shelf life and a sell by date. Walter’s rise was so swift that his decline appears to have been equally swift. By 1950, apparently ravaged by drink and drugs, Walter was on the scrap heap. There are no further references to him after this date. If you troll around the second-hand bookshops in your town, you might find an old encyclopaedia that still carries a reference to him, but all rewrites have taken out all records of his great achievements. If you now look up Time magazine’s records, you will discover that they now list someone called Eisenhower as 1944 Man of the Year, quite clearly a fictitious character. You may notice too that they have once again begun to introduce fanciful accounts of the fierce fighting in World War Two and stories about an atom bomb. Can you believe it? What will they think of next?