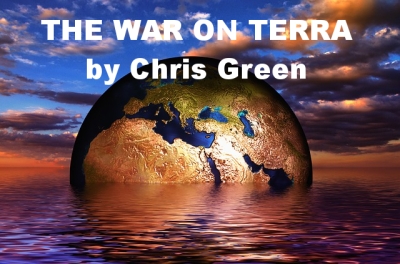 The War On Terra by Chris Green

There are now just thirty four of us trying to save the planet. I’ve counted. Thirty four, plus a few more perhaps living off the grid. The other seven point four billion residents of Terra are hell bent on its destruction, some pushing to get the job done more quickly. What was God playing at letting his unpredictable monkeys run the show? She should have given it to the snakes or the zebras. The ferrets or the pigeons. Or possibly even the trees. The only way to save the world in these dark days could be to get rid of the human race.

Time was when for a short while, things were impossibly beautiful. There were two hundred and seven million of us trying to save the world. A paradise seemed possible if only people would listen to the message of love, peace and understanding that we preached. The Incredible String Band played in our hearts. Everywhere colourful birds were in song. Lovely spring had arrived.

But it was a brief interlude. God’s chosen monkeys were just beginning to get organised in THE WAR ON TERRA. Terra’s climate, they claimed, was not good enough, so in earnest they set about changing it, coming up with staggeringly stupid new products to use up Terra’s resources in record time. Compassion and common sense were universally outlawed to allow feral capitalism to flex its bloated muscles. They came up with alarming new ways to pollute the life giving waters in every corner of the globe. They came up with bizarre new reasons to reduce the rain forests to grow numbers in their profit columns. It was seen as important that the War On Terra be settled swiftly.

Two hundred and seven million gentle campaigners were seduced by the arrogant mendacity of those determined to destroy the delicate domain of existence. The powerful media groups the plunderers owned persuaded would be dissenters that their interests lay in siding with them in their irredeemable mission. Like the Native Americans before them who had traded Manhattan for beads and trinkets, would be eco warriors were bought. A few electronic toys were all it needed to win them over.

The War on Terra may be already be in its endgame, but while there are still a few fish left in the oceans and a pair of polar bears at the pole, join us if you can so we can say we went down fighting. There. That’s thirty five of us now. Thirty six. Thirty seven. ………

2 thoughts on “THE WAR ON TERRA”