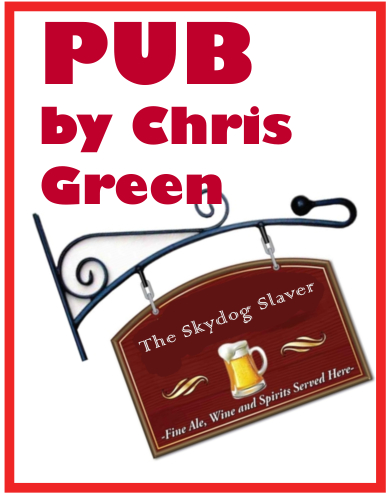 ‘You’re probably wondering why the pub is called The Skydog Slaver aren’t you?’ Nigel Slough says.

As it happens, I am not. I have been coming here for several weeks. At first, I may have been curious about the name but now I just take it for granted.

‘I’m just going to take Murphy for a walk,’ I might say to Stacey. ‘And then I may pop in at Skydog.’ Sometimes I refer to it simply as The Slaver. Either way, the name slips off the tongue as the most natural thing in the world. I felt the same way when I used to drink at Pizza Burning. I didn’t wonder why it was called Pizza Burning. In the end, I found out but pub names are pub names. They have always been somewhat removed from sensible everyday language. The Bull and Spectacles, The Cat and Custard Pot, The Swan with Two Necks. You can get away with any mad name. I noticed the other day there’s a pub called The Job Centre.

I wouldn’t want you to think of me as an alcoholic. But Murphy is an Irish Setter. He needs a lot of walks and walking Murphy is thirsty work. One of the disadvantages of going to pubs during the day though is that you are likely to be preyed on by the pub bore. Nigel Slough is the pub bore at Skydog. Regulars give him a wide berth.

‘I’d always heard it as scarred old slaver,’ I say. ‘But I could be wrong.’

‘No. It’s not right. That’s the point,’ Nigel says. ‘But in America, Mick now sings skydog slaver in that verse to humour those who think it ought to be skydog slaver. Anyway, that’s the reference. That’s how this pub was named. I just thought you’d like to know.’

Pointing out that I recently discovered Pizza Burning is a misnomer of Beast of Burden would only prolong the conversation.

‘Scuse me while I kiss this guy is another mondegreen,’ Nigel says, undeterred.

I can tell he has an encyclopaedia of misheard lyrics at the ready but Murphy has finished his bowl of Guinness and is anxious to leave.

Back in the car, I put on my Major Lance compilation CD. Major was his real name, by the way, not a title. He is still a big hit on the Northern Soul scene. While, Um, Um, Um, Um, Um, Um is playing, it occurs to me that Nigel is probably the way he is because he is lonely. If he had a partner he would, in all likelihood, be completely different. He is not altogether unpresentable. He wears bold-checked shirts with dark chinos and is only a little overweight. A few sessions at the gym would sort this out. He might be the wrong side of forty but if he didn’t wear those old-fashioned aviator spectacles and had a more stylish haircut, he would probably brush up quite well.

If Nigel had a partner, of course, he would be able to share all his factoids with her and not save them up for unsuspecting tipplers at Skydog. But I feel I should be a little sympathetic. Perhaps we all have a tendency to hold forth on things that interest us. I’m sure that on occasions, I have bored people silly waxing lyrical about Northern Soul. After all, it appears not everyone is interested in the history of the Prestatyn Weekender or which Little Anthony and the Imperials B-sides are popular. And most people have never heard of Archie Bell and the Drells.

I recall Stacey telling me recently that her friend, Lottie was lonely. She had just broken up with her partner, Nick. They had been together for fifteen years. Nick ran off with Tina from the tanning shop.

‘Perhaps we could invite Nigel and Lottie round for dinner,’ I say to Stacey. ‘They are both at a loose end. You never know, they might hit it off.’

‘That’s not like you, Roger,’ Stacey says. You don’t normally show much concern for other people’s welfare. Are you sure you’re feeling alright?’

‘I just thought it would be a nice gesture.’ I say. ‘Everyone needs somebody.’

‘Well, Lottie did seem a bit down in the dumps when I saw her at yoga. She could do with a bit of TLC. What’s he like, this Nigel?’

‘Considerate. Witty. Knowledgeable. On the whole, I would say he’s pretty entertaining. All the guys at The Slaver like him.’

‘It’s just that I thought I remembered you saying he was a bit of a bore.’

‘No. You’re thinking of Trevor. Trevor is really tiresome. Trevor just goes on and on about nothing.’

Stacey invites Lottie around for Friday evening. I’m not sure she has mentioned that Nigel is coming but she says she has. In the meantime, I manage to drop a couple of hints to Nigel about the dress code for the occasion and mention in passing that perhaps his hair could do with a trim. I also suggest he limits his pop-culture references as Stacey is a little old-fashioned. Time being of the essence, I decide we will have to accept the aviator specs for now.

‘This asparagus and Parma ham bruschetta is lovely, Stacey,’ Nigel says. ‘Did you know that bruschetta dates from the time of the Roman Empire? Olive growers used to bring their olives to a local press to taste their freshly pressed oil using a slice of bread. Roman cuisine was more sophisticated then people realise. They included olives in entrées and dressed their salads with oil of the highest quality. It was also the basis of their sauces and they used it in different kinds of dough or pasta.’

I’m wondering if, having taken aboard my hint about avoiding pop-culture references, he is overcompensating with historical references.

‘Speaking of oil,’ Lottie interrupts. ‘Have you seen the film, Bohemian Rhapsody, Nigel? What made me think of it is that line, I sometimes wish I’d never been boiled in oil.’

‘I get you,’ Nigel says. ‘Good one, Lottie. You mean the misheard lyric for, I sometimes wish I’d never been born at all.’

‘That’s right,’ Lottie says. ‘Did you know that’s what’s known as a mondegreen?’

‘Happy as a rafter in the market place,’ Lottie says.

‘The ants are my friends, they’re blowing in the wind,’ Nigel says.

‘Sweet dreams are made of cheese,’ Lottie says. ‘Who am I to diss a brie?’

What have I started here? I try changing the subject to Northern Soul but to no avail. Nigel and Lottie have their own agenda. They move on seamlessly to not many people know that trivia. I feel left out. Not even my story about the police raid at the Edwin Starr concert at Wigan Casino sparks interest.

On the plus side, Stacey seems happy. She feels her dinner party is going well. Even the slightly overdone steak and parmesan involtini does nothing to dampen her spirits. Nigel and Lottie are so enamoured with each other they would not have noticed if it had been served cold. They probably would not have minded if Stacey had dished up cabbage pie with broccoli. At the end of the evening, they go off together arm in arm.

Each time I pop into Skydog with Murphy for a refresher now, I cannot help but notice that Nigel is not there. He seems to have stopped coming in altogether. Lottie must have him on a tight rein. I had not noticed it before but without Nigel, I have no-one here to talk to. None of the regulars seem to be interested in Northern Soul. If I didn’t know better, I would say they were going out of their way to avoid me. Barry no longer offers me racing tips and Gary no longer offers to share his porky scratchings with Murphy. And Dave, the landlord has started charging me full price for Murphy’s bowl of Guinness when I know he gets it from the dregs. I think I may have to start drinking at The Dalek in Pain. Dalek in Pain? I wonder how they arrived at that name. Perhaps, like Skydog Slaver and Pizza Burning, it’s another misheard lyric from a Rolling Stones song.