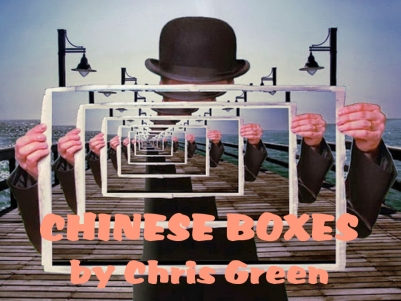 The fire engine comes hurtling towards me. It is out of control. It has no driver. Conan Doyle Street is narrow and the precipitate leviathan gathers momentum as it heads down the slope. I dive for safety into the doorway of the antiquarian bookstore. The fire engine forges ahead, gradually slowing as the incline levels out. It comes to a stop in the dip where Conan Doyle Street meets Rider Haggard Street. Fortunately, there are no casualties as the streets are deserted. This part of town is no longer prosperous and a lot of the shops are boarded up.

I am on my way to the doctor’s in Bram Stoker Street, a block or so away. I don’t have an appointment, but when I phoned earlier I was told someone would see me if I came along. I let the sour-faced receptionist know of my arrival and sit in the grey waiting room. Afternoon surgery has finished and I am the only one there. For comfort, I take my Doc Martens off. I start to read a monthly military magazine, but I can’t concentrate. After a few minutes, Dr Bilk comes through and says that he will see me but he has to make a phonecall to the hospital first. He asks me to go wait for him in Surgery 2.

Realising I am in stockinged feet, I go back to fetch my boots. It takes a while to lace them up and when I return Surgery 2 is locked. Dr Bilk has disappeared. I look everywhere for him. I go out into the courtyard. I look up and down the street. Back inside, a dozen or so men in dark suits are having a meeting in the room down the corridor from the locked surgery. There is a hostile air about the gathering. I do not like to interrupt. I go out to the car park. I manage to collar Dr Bilk, just as he is getting into his car. Without bothering to listen to my symptoms, he hurriedly writes me a prescription. I have not heard of the medication, he prescribes. Perhaps he has made a mistake.

What makes me want to return the fire engine to the fire station I do not know. This is what happens sometimes, isn’t it? In a moment of madness, you find you make a decision that you just can’t account for. It’s as if a force takes over and you no longer have free will. It may be just me but I have noticed that these decisions are often injudicious.

I am not used to handling such a bulky vehicle and I have several near collisions with other cars on the way. I accidentally cross two sets of red traffic lights and manage to negotiate the Henry James roundabout on two wheels. When I finally arrive at the fire station, I find that it is closed. What would happen if there were a fire? I park the vehicle outside the book depository in Franz Kafka Street. I think about phoning my brother, Quinn to come and pick me up, as it is now after six o’clock and I need to get home for dinner. I am suddenly struck by the thought that my fingerprints will be all over the fire engine and they will think that it was me that stole it.

I come to with a start. I do not recognise my surroundings. Red would not be everyone’s choice of colour for bedroom walls and Francis Bacon’s mutilated torso prints would not be to everyone’s taste to hang on them. There is a large sagging woollen drape coming down from the ceiling and a silver saxophone on a stand in the corner of the room, alongside a device that looks like a medieval instrument of torture. Mr Bojangles is playing from a portable red speaker, a grunge version that I am not familiar with. The room has a musty smell.

The important question seems to me to be how did I come to be here? I have no recollection. Where is my beautiful house, my beautiful wife and my large automobile? How do I work this? Before I have a chance to get my bearings there is a loud knock at the door. I leave it at first, but when no-one else answers it, I conclude that I must be alone here. On the second or third knock, I go to to the door. A man is standing there holding a large metal plate. He doesn’t seem surprised to see me.

I don’t have any idea where the kitchen is, but he seems to know.

‘Did I wake you up?’ he asks as I follow him through to the kitchen.

‘No,’ I say, looking around to take in the funky chickens strutting about the place.

‘Good idea to keep them indoors,’ Cookerman says. ‘Stops the foxes getting them. There are a lot of foxes about round here.’

I don’t ask him where round here is in case he gets suspicious.

‘Rhode Island Reds, these little beauties,’ he says. ‘Good for laying brown eggs. Perhaps we might have breakfast when I’ve done the cooker.’

The kitchen is kitted out in an odd mix of styles, a startling hybrid of Scandinavian chic and Dickensian squalor. I have not seen a zebra patterned fridge, or a red cooker before. Cookerman takes it all in his stride. Perhaps he comes across vibrant appliances every day. Ducking beneath the cast iron pots and pans hanging from butcher’s hooks on the ceiling, he makes his way over to the cooker and opens the door. I don’t know if you’ve ever seen a cooker explode. I’m guessing most of you haven’t. But I can tell you, it does wake you up.

Which is how I come to find myself in a barnacled beach hut in the middle of a storm surge, with the waters already sloshing over the sandbags. The wind is getting up again and it has turned round to the north. The spring tide is due to keep coming in for the next two hours. Looking through the gap where the window once was I can see more black clouds forming over the steep escarpment the other side of the bay. With the water already around our ankles and the roof leaking like a faucet, the last thing we need is another downpour.

Earlier, I tried in vain to rescue a struggling black Labrador that was being taken away by the rip current. My leg became trapped and I was thrown against the rocks. I was knocked unconscious. She is only slight and I am nearly fourteen stone but somehow Vision dragged me here to this beach hut, the highest beach hut in the row. Some of the other huts have already broken to pieces and been taken out to sea. I can hardly move my damaged leg, so we won’t be leaving anytime soon. We are at the mercy of the elements. We are trapped.

‘Don’t you know what time high water is?’ Vision asks, looking at her watch. ‘It must be soon.’

‘We’ll send out a mayday then, shall we? Where did you put the flares?’

We are caught between the devil and the deep blue sea. If Vision goes for help we are both at risk. If she stays we are still both at risk.

‘I guess we’re in this together then,’ she says. ‘That’s what we used to say isn’t it?’

As the waves continue to crash against the flimsy fabric of the hut, it feels like being aboard a ship going down. I have the urge to break into a sea shanty, to summon up the sailor’s spirit, Blow The Man Down, Haul Away Joe or something like that.

Is that a lifeboat I can see in the distance? ……. Is it? ……. Or is it just another phantom? Am I doomed perhaps to an endless chain of unfathomable nightmares from which I can never wake? Doomed to grapple feebly with this nest of interlocking riddles, that fit inside one another like Chinese boxes?