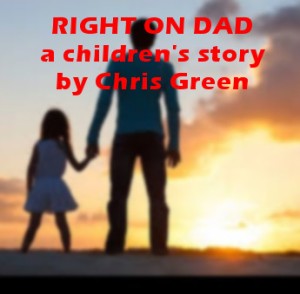 Right On Dad – a children’s story by Chris Green

‘What’s politics, Daddy?’ said Amelia. Amelia is four and a half and has just started school.

‘Aha! Yes what is politics? Well, Amelia. Every now and then we grown ups play a game to say which party we want to make the rules about what we can and can’t do.’

‘Party? You mean like a birthday party. I like birthday parties. You get cakes and fizzy drinks, and play pass the parcel,’ says Amelia.

‘No, not quite like birthday parties. The parties that we choose to make the rules are more like groups of busy looking people. They like to talk a lot, and shout, especially shout. There are two main parties. The Nice party and the Nasty party. The Nice party want to help people, let them have food and houses and make the world a better place and the Nasty party want to steal everyone’s money, cut down trees and hurt people. Sometimes they make bombs and kill people too.’

‘Do they sing songs about it, Daddy? I like songs. They taught me a new song at nursery today.’

‘I expect most people like the Nice Party, don’t they, Daddy.’

‘A lot of people like the Nice party, yes, Amelia. But the Nasty party usually win the game to make the rules.’

‘Well, the Nasty party are friends with the people who make the newspapers and the television programmes. They tell people they have to let them make the rules because they are better at making rules than the Nice party. They say that the Nice Party smell and will give you measles.’

‘I think the Nice party would make up much better rules. They’d let you have chocolate cake for dinner and go skipping.’

‘I didn’t say just now, but there is a third party called the Nice and Nasty party. They can’t decide whether they want to help people or want to hurt people.’

‘Did the Nasty party win the last game, Daddy? Is that why there are all those pictures of dead people on the television?’

‘Yes, Amelia the Nasty party made up some new rules to help them win the game.

‘You mean the Nasty party are cheats.’

‘And, Amelia. They got their newspaper people to say that the Nice party’s man was from Mars and that he ate kittens for breakfast.’

‘Uh! I can see why they are called the Nasty party, Daddy. I wouldn’t want them to eat Chloe.’