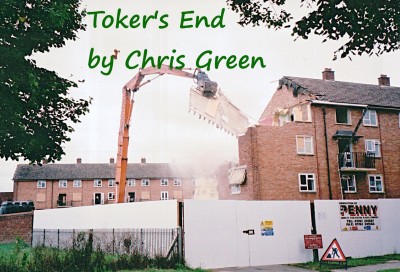 My DuckDuckGo search came back with the names of several estate agents in my area, but King and Castle seemed to be the premier firm, not least because their advertisement said so. So, later that day I called into their High Street office and asked if I could see Mr King or Mr Castle to talk about my requirements. Mr King it transpired was in prison and Mr Castle, according to Saskia the heavily made up blonde haired girl who greeted me, was fictitious. Thus I found myself talking to a disarmingly young man called Matt Black. He wore a shiny grey suit and a grey knitted skinny tie. He fiddled nervously with an empire of desk accessories.

I told Matt I was looking to buy a small town and asked him what King and Castle had on their books. He told me that there were not too many small towns on the market, because with other investments taking a tumble, small towns represented a popular option for the great and the good to invest their capital. The smart money was going into large plots of real estate, he said. In the last week, King and Castle had sold both Bridgewater and Bideford, Bridgewater fetching the full asking price.

I looked at him aghast. ‘Bridgewater, really?’ I said.

Twiddling his grey bullet pen, Matt explained that the cellophane factory that had been the cause of the notorious Bridgewater smell had recently closed. Bideford of course had been snapped up because it was in Devon. Devon was the cream of the crop when it came to mass freehold residential. Even Barnstable, the epitome of blandness, had sold within forty eight hours.

Setting his Newton’s cradle in motion, Matt confided that he had Cheadle at £4,000 million and Yate at £3,000 million and also Didcot and Hythe, but he felt that at £5,500 million neither was realistically priced, and if I were to consider either of them he would recommend I put in a lower offer.

I began scanning the details of Cheadle and Yate, but despite what Matt called ideal renovation opportunities, neither of them captured my imagination. Cheadle’s proximity to Manchester was not in its favour and Yate was just plain awful. I remembered the Crap Towns description of Yate, citing it as a hell hole, a mecca for chavs, goths, skaterboys and griegos. Didcot did look more attractive but there was the power station to consider. I understood Hythe being on the Kent coast, to be overrun with asylum seekers.

‘Or you might contemplate renting a small town,’ Matt continued, massaging the keys on his laptop. ‘Our letting agency has several to rent.’ He directed his delicate, manicured hand towards Saskia, who apparently was in charge of lettings.

It was not a reflection of Saskia’s attributes or abilities that I did not look up. What would be the point in taking out a rental agreement on a small town?

Matt could sense my apprehension. He tried a new tack.

‘I have here an interesting opportunity,’ he crooned. ‘And it has only just come on to the market. It is a fabulous little suburb. It has a quaint name, Toker’s End. Its on the fringes of a smart Regency town. And its a steal at £999 million. It has a bohemian feel, a cosmopolitan population, and a falling crime rate. And there are plans to renovate the derelict shopping centre.

‘You might even be able to get a 95% mortgage on it,’ he added encouragingly.

I told him I might need to borrow the 5% deposit as well.

‘No problem,’ he chirped. ‘A lot of buyers are doing the very same thing.’

I enquired what the repayments on £999 million might be.

Taking out a calculator that looked more like something Scotty might use to beam up Captain Kirk, he started to press some buttons. He finally arrived at a figure. ‘£5,570,000 a month based on 25 years,’ he said.

At first this appeared like a large commitment, especially as I owed £29 million on my Titanium card. I quickly regained my composure, at least I like to think that it was quickly, although when I came to, Matt was on the phone talking to another client. Saskia smiled across at me and carried on painting her nails.

By the time Matt was free I had reasoned that although I owed £29 million, this had not stopped financial institutions pleading with me to borrow more, almost on a daily basis and it was impossible to use the internet without pop ups for loans appearing all over the desktop. Debt encouraged lenders.

‘Let me show you some pictures,’ Matt purred.

Looking at the virtual model of the estate on his laptop, I began to discuss with Matt what I might like to do with Toker’s End.

‘I think it would be better if these two streets were knocked into one. What do you think I should do with the residents?’

Matt confided that there was a small refugee camp nearby, where they could go. ‘New government initiative,’ he revealed. ‘You know, to stem the influx of immigrants.’

‘And I’d get rid of this unsightly Catholic church.’

‘I think I might do the same,’ Matt chuckled.

‘I might want to extend this park and knock down these tower blocks here and build a lake.’

‘No problem,’ said Matt. ‘I think we would be able to arrange a favourable rate for a loan to do that.’

I began to wonder what had happened to the restraints on financial institutions that were brought in after the meltdown. You heard nothing now about sub-prime lending or due diligence. It was business as usual for the banks. Even if you were hugely in debt, there were few obstacles to buying a small town, well at least a suburb with an interesting name. Even my speculative plans for an airport it appeared could be easily accommodated. All I had to do was to say how much I wanted to borrow.